Can you see Daddy behind the camera?
Originally uploaded by Nancy Allen
Man, I can't wait for 2009.

In 2008, I saw so many of my friends lose so much. Jobs. Family members. Pets. It seemed for awhile that every time I opened an email or logged into a message board the news would be grim.

2008 was an election year here in America...and I have not in my 37 years seen my country so polarized. You could feel the tension on the streets. People that I've known all my life have surprised me with their political leanings...on both sides of the aisle, to quote a cliche that I'm sick to death of by this point.

Our brave men and women that serve in the various branches of the military continue to be in harm's way due to the "war."

And yet, amid all that negativity, just when I start to mourn the loss of 365 days of my life that I'll never get back...there are bright spots.

January 1, 2008: Well, technically he asked when I got there on NYE but I'm going to count that it started the year...Simon asked me to marry him at Manchester airport...and all I could say was "What are you doing? What are you doing?"

February, 2008: My greyhound group was instrumental in recovering a greyhound that had been loose for several weeks and reunited her, unharmed, with her owner.

March 2008: Sandy Paws. Always a good time. Anything that brings me together with all those other people that are just as insane about greyhounds as I am is good. Plus, Simon was here for almost three full weeks, so that's good too.

April 2008: My Jeany Bean, the dog that I feared losing to my ex-husband, turned 11 years young and celebrated her 8th gotcha day. April was truly the Month of the Bean.

May 2008: Mills Mon Aristochat turned 10 and my former foster dog Simon (WV's Sweet Simon) found a new home with a young woman who has rightfully placed him at the center of her universe.

June 2008: Leah broke her ankle but came through the surgery to repair it with flying colors.

July 2008: After celebrating his birthday and then receiving some of the WORST care I have ever seen in my life from a "specialist" vet practice, my Hunky came through whatever was wrong and got back to his normal, silly, forgetful, now 12 year old self.

August 2008: The Olympics happened in Bejing, and for a few moments I remember why I'm so proud to be an American. But more importantly, the light of my life Daisy turned FOUR...and still hasn't grown into her brain. Ah well, there's always 5...

September 2008: A wonderful two weeks spent in Keighley and surrounds were followed by a fantastic trip to Myrtle Beach for Beach Bound Hounds.

October 2008: My time for one week this month was consumed by the Twilight series. I am so thankful for the reminder of how wonderful it is to be that lost in a book.

November 2008: The light at the end of the tunnel appeared on 4 November when We the People voted in Barack Obama as our next president.

December 2008: On the first of December my life changed forever when my niece Joy was born. I was not prepared for the feeling I would have for this tiny little person who was my niece...not just a niece by marriage but my sister's child. She restores my faith in the world, that one.

2009. Change is coming and it's all going to be all right. In three days I'll be married to the most wonderful, frustrating, hilarious, loving and caring person I've ever met in my life. In five days I'll have my wiggly and wonderful dogs back from the sitter. And in the next coming months I'll suprise everyone, especially myself, with the strength I'll possess in the face of the wonderful adventure awaiting me in the UK. Anna Joy
Originally uploaded by Nancy Allen
My Most Perfect and Gorgeous Niece, Anna Joy Allen Grady. This was taken when I was staying with Dave and Sooz, the night before I picked Simon up from the airport. Leah sent me a text asking "How's it going," and I sent this pic back in response.

Have Yourself a Busy Little Christmas...

Things around here are going...well, they're just going. I think this is the first time I've really had to sit down and just think since last Monday, and it's already giving me a headache. Simon arrived as scheduled Monday the 15th. I got to the airport just after he landed, and stood at the top of the escalator that leads to the baggage claim at Hartsfield for an hour waiting for him to jump through all the hoops required of international arrival. Perfect song after perfect song came on the iPod that would have made his appearance at the top of the escalator a scene to rival the opening ones of Love Actually...and he didn't appear. Honestly I don't remember what was on the iPod when he did appear because everything stopped. He was here, in America, and that was literally all that mattered.

We collected his bags and rode MARTA (because really, it's SMARTA) up to Kensington where my car was waiting, then headed to Susan and Dave's. Simon got to meet my Most Perfect and Gorgeous Niece, Joy, and then we all enjoyed a magnificent feast put on by my Sleep Deprived Brother in Law. A grand time was had by all.

Back up to Greenville via Canton, GA to pick up the pups. I truly think that Daisy remembered Simon because she danced and pranced and hopped and tried to jump into his arms. What a good girl. H and J couldn't be bothered with us because we interrupted their naps, I think.

Got to Greenville and we've pretty much been on the go ever since! Christmas shopping, two days of work at the University for me, lunch with Mom and Dad down in Commerce...busy busy. If I had any lingering regrets about quitting DMH when I did they're gone...I couldn't have kept up this schedule had I not decided to freelance my last two months in the US.

Now on to a bit more freelance work, an overnight with Mom and Dad, two nights with Sooz and Dave, a family Christmas party with Mom's family and then...the WEDDING.

Wait, let me take a sec to let that sink in...the wedding is a week from Saturday. One.Week.

Okay, now that I'm about to pull out all my hair, I'm off to get ready for a freelance gig and then get the rest of the presents wrapped and Mills to the vet for boarding and the dogs ready to go to their sitter tomorrow and and and...

Merry Christmas, Lettuce Readers. I'll catch you on the flip side...eat much, love much, laugh much, and count your blessings!
at December 23, 2008 No comments: Links to this post This time, I'll get that Santa...
Originally uploaded by Nancy Allen
Mills has found a new hiding place now that I've rearranged his old hiding place. This picture reminds me of one someone took of my girl Franny a few Christmases ago in Montgomery, and made me miss all my babies that are only with me in spirit.

Tonight I'm sad for an internet friend of mine, Chrissy, who unexpectedly lost her greyhound boy Speck (Speculation, Specky Lee, the Speckster) today. There's a new star in the sky, but somehow the Christmas decorations seem a little more dim.

But instead of being too sad, I just imagine that Mills is lying in wait for the Fat Man to come down Mommy's chimney, so he can finally find out first hand (from someone that's been there) what the inside of the chimney looks like...since Mommy kept yanking him out of there and finally put the Gone With the Wind poster up to block further exploration.

In other news, Simon will be here DAY AFTER TOMORROW. At long last...
at December 13, 2008 No comments: Links to this post 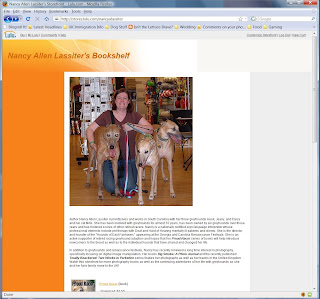 This post is a shameless plug for my Lulu.com storefront. Please go and at least visit, but if you buy something that would be great too. All proceeds go to the Send Nancy To The UK With Enough Cash Left Over That She Can Eat fund. Truly a worthy cause.

Either click the title above or the linked text to see "what I'm on about..."
at December 09, 2008 No comments: Links to this post