Last weekend I happened to see a thread on a large message board to which I belong that announced a missing greyhound in Anderson, SC. Further, said missing dog was seen in areas very close to where Scott and I used to live, so I made a plan to join the search.

Monday afternoon I took my three dogs and we tromped about in the mud at the edge of Lake Hartwell, looking at tracks in the mud and discussing where to put the trap on the property that clearly wasn't ours. It was while I was there that I learned more about the dog for whom we were searching.

Her owners were moving and had family helping them, a door wasn't shut tightly, the wind blew the door open, and out one of the greyhounds went to investigate. (I nearly had the same kind of experience just this morning...the lawn service came and somehow didn't feel it was important to shut the gate behind them, but I digress...) She went missing on the 9th of February, and because the adoption group that her owners used is no longer in business, they felt they were on their own to find her. Finally they had to both move to their new home, leaving behind a newspaper ad and hope that someone would find her.

When those of us in the greyhound-owner community found out she was out loose, we could have just hugged our own hounds and been sad for the poor dog from our own warm homes. But we didn't. We posted and crossposted information on message boards. We made calls and sent faxes with the dog's information and last known whereabouts. We tromped about in the mud and underbrush, straining to hear tags jingling over our pounding hearts every time a twig snapped in the nearby woods.

We sat out in the dark, hoping she would magically appear. We made arrangements for search parties and skipped out of work to join the hunt. And finally, as if lead by some unseen force, our poor lost girl wandered up to some volunteers and let them hook a leash to her collar to bring her in from the cold.

I spend a lot of my time alone. I'm engaged, yes, but I'm still single. I have a lot to do for my animals that sends me home for lunch rather than out to a restaurant with co-workers and forbids me to stay out late with friends shopping or just hanging out over a cup of coffee. I don't begrudge my zoo one moment that I've missed out on with someone else to spend time with them, but sometimes I end up feeling rather like an island. My island has a connection to the mainland through the internet, of course, but in my own mind I always plan how I will deal with things on my own. I don't expect others to help me or to even really be there for me, because I've just gotten used to doing things myself and being my own support system.

Seeing all these people come together to help this family that we didn't even know...that most of us had never even seen, let alone spoken to on the phone...it reminded me that there is a world outside my four walls and that I need to rejoin it before I've isolated past the point of sanity. There are good people out there who will help you out for no other reason than it's the right thing to do. They don't want anything from you. They aren't using you. They're just there, ready to help or listen or dig through rubble to find your lost dog, and I'm proud that I was one of them...and thankful for the reminder.
at February 29, 2008 No comments: Links to this post 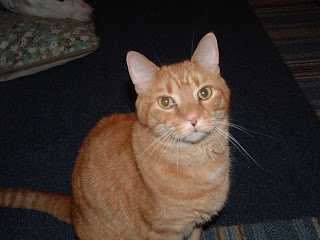 That cat is my hero this morning. After an overnight interpreting assignment that has left me useless and out sick from work today, I was awakened to the familiar sound of Mills chasing thin air as he does every morning. Only this morning it wasn't thin air. It was a mouse.

Sadly I was on the phone to Simon when I discovered what Mills had and therefore caused him some permanent hearing damage when I split the sound barrier squealing.

My little mouser first cornered his prey in the closet in my office, then herded it out to the sitting room as I got something to scoop it up in so that I could usher it outside. Mills chased it out from under the chair, and then kept it under the table until I could get it into a tupperware container. I then took it outside and flung it into the yard and that little buggar ran STRAIGHT BACK FOR THE STAIRS to come back in the front door. Thankfully it saw me standing there and ducked around into the bushes on the front of the house, then into the house via a vent on the front in the foundation. Hooray.

I couldn't just sit and watch Mills kill it though...don't get me wrong, I don't want mice in my house but there is something so evil about how cats kill their prey. And it made eye contact with me...that was all she wrote. Simon had encouraged me on the phone to save it, chuck it out the door to freedom rather than let Mills kill it, so that's what I did. And the intelligence I saw in those eyes (coupled with terror, of course) lead that little critter right back into the crawl space under my house. Again I say Hoo-Ray.

His adventure this morning has bolstered the opinion in Mills's mind that he is the alpha in this pack. As I was making my tea, he stood up on his hind legs to look (he seems to think that this simple posture will magically make him tall enough to see over the top of the counter) and the dogs came over to see what he was watching. I don't know what exactly happened next but Mills moved his head at them like "You want some of this?" and all three dogs BACKED UP. Too funny.

I gave my little man a saucer with a little milk in the bottom and scratched his ears before he took off on patrol again. Je t'aime, mon Aristochat. Je t'aime très beaucoup.
at February 26, 2008 No comments: Links to this post Greenville, Reflected.
Originally uploaded by Nancy Allen
I took this back in December with my phone while stopped at an intersection and it is still the wallpaper on my phone. I love downtown Greenville, especially at night during and shortly after Christmas when the lights are still in the trees (they may be up all year, I just tend to be down there in the evenings more at Christmas time).

If I ever leave Greenville this is what I will miss the most, and that is why I adore this photo.
at February 21, 2008 3 comments: Links to this post

if you were a college student between 1984 and 1994, to listen to "Kiss Off" without dancing around the room, banging your head and jumping up and down.

Rediscovering music...iTunes rocks. By the way, check out De Novo Dahl. Their song titles are a little...wonky, to say the least, but I got turned on to them by a recent Sci Fi channel commercial featuring their tune "Shout" and I'm loving it. It actually makes me want to go for a fast paced and ever-so-slightly funky walk around my neighborhood.

Further, let's investigate my musical reccomendations for this week shall we (otherwise known as what I keep skipping to on my iPod)?

American Music and Kiss Off by the Violent Femmes
Gone Daddy Gone by Gnarls Barkley
All that Matters by Addison Road (one of this week's free tunes on iTunes in the USA)
Sisters of Avalon by Cyndi Lauper
Paralyzer and One Thing by Finger Eleven
Love Song by Sara Bareilles
Where Are You Now? by Ian Van Dahl
Song 2 by Blur (if you're a Torchwood fan...)
Your Guardian Angel by The Red Jumpsuit Apparatus
at February 16, 2008 No comments: Links to this post

It's a Sappy Kind of Thursday Whatever our souls are made of,
his and mine are the same.
~E. Brontë, Wuthering Heights Note to Self: Ask Santa for proper electric skillet for Christmas this year.
at February 06, 2008 2 comments: Links to this post