[Link to the article is in the photo.]

Most of you that know me know that my father was a United Methodist minister (as is my maternal uncle, sister, and brother-in-law), so I grew up a "preacher's kid." I'm sure that this conjures lots of images in your mind of holier-than-thou kids and hellraisers alike, but I think I speak for both my sister and me when I say that we were fairly normal kids.

I mean, as normal as you can be when you are moving around from home to home every four years or so (by the time I was in high school, it was seven years or so between moves). I have likened my upbringing to military kids, only it's still not the same because you are much more in the spotlight as a preacher's kid.

For example: When I was in high school, my father's sister Ruby came to stay with me and my sister Susan while our parents went to a minister's retreat of some sort. I was driving by that time, so I remember being pulled over by the chief of police with my aunt in the car. Now I knew him fairly well - we lived literally across a street and some railroad tracks from the police station and my dad had been called out at all hours when someone needing help ended up over there. So he gets out and walks to the window - I was sweating and she was seething - and when I rolled down the window he told me he'd pulled me over to tell me to tell Hoyt (my dad) to put the new sticker on his tag soon. Before I thought about it, I said, "You pulled me over for that? You just scared me to death!" He laughed and went on his way.

My aunt, by the way, was still furious and had to let that anger out, so I got a three-point sermon on the way back home on how we did and did not speak to the police.

I wanted to post today after seeing the picture above circulating on Facebook this week. Jenna Bush Hager, one of President George W. Bush's daughters and current personality on NBC's Today Show has been featured recently in the discussions about the smooth transfer of power that happens in the US after a presidential election. Well, it's supposed to, anyway.

The picture above has the Bush daughters and their mother, First Lady Laura Bush, showing the Obama daughters around the White House before they moved in with their family. The letter that the twins wrote to Sasha and Malia reminded me so much of moving into a new parsonage - though I don't remember meeting any kids that lived in our new home before we did.

“Malia and Sasha, eight years ago on a cold November day, we greeted you on the steps of the White House. We saw both the light and wariness in your eyes as you gazed at your new home,” they wrote. “The four of us wandered the majestic halls of the house you had no choice but to move in to.”

It also brought home the fact that my sister and I are in a rare club - UMC Preacher's Kids - and that some of my closest and dearest friends have come from that group. We understand each other - we get the weirdness and the odd memories - and we cherish that sameness that helps us be the best and most authentic versions of ourselves, wherever we ended up after we left the houses we called home, no matter how briefly.

So today, on Remembrance Day, I'm thinking about a UM preacher (who also served in the Army) and his wife and their two daughters moving into a new house, a new church, and a new life, and I am thankful. The grace that they showed, not unlike that shown to the Obama girls by the Bush daughters, guides my life, even today. 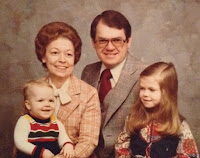 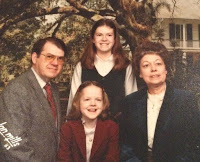