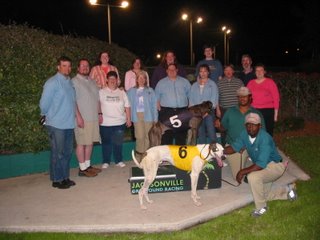 The photo is from Monday night at the track. After a wonderful day spent at the track kennel first and the farm second, we hit Orange Park for an FTH party! We had two races that were designated "picture races" that night in our honor so we trooped down in shifts to have our pictures taken with the winner. In the shot above, the winner is the one on the boxes but the dog in the number 6 blankie in front is Greys Big Chance, one of the dogs running for Cathie and Bill's kennel. He came in second and man oh man was he something to watch run.

My Daisy ran her first official schooling race Monday night and got 5th, not too shabby. I was a nervous wreck, especially after seeing Leah's boy Bernard go end over end and hit the wall in the first turn during the race right before Daisy's. That was a testament to the strength and determination of the breed though... Bernard hopped up and started following the pack but then turned around and made it back to the finish at the same time they did...just ran the wrong way. A link to the replays of the races is here, go to the Vault and pick March 6th, then click on 5scl for Bernard's cartwheel and 6scl for Daisy's race.

By the time Monday was over, I was exhausted and in some ways ready to come home, but in others incredibly sad. I think Mama Cathie put it best when she said she told her boss she had made some new sisters over the weekend. My house was so quiet when I got home, void of the sound of their laughter and squeals and especially the snorts. Daisy is again hundreds of miles away, and I miss her now more than I ever did before. She will be running her second schooling race tonight and you can bet I will be glued to my computer monitor.

Thanks guys, for the best vacation I've had in my life so far. I have not laughed that hard, cried that hard (at the memorial service), played that hard, or fallen in love with new friends that hard in a long time. I'm raising my coffee cup (full of Tim Horton's coffee, of course) to my new old friends. Until next year...if not sooner!!
at March 09, 2006