And then it became real... 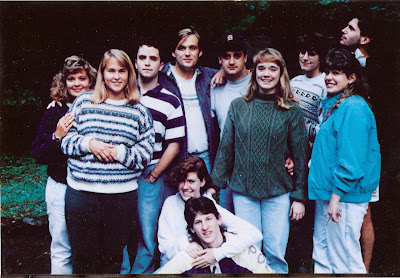 Gun control. Violence in our country's classrooms. The right to bear arms. Adequate mental health services. All the bees that have been flying around in my head concerning the tragedy at Virginia Tech a week ago were silenced, really, when I found out that someone I knew and loved, someone I worked with at the holiest place on earth, Camp Glisson... someone that was kind and intelligent and creative...was one of the professors that was killed last Monday. 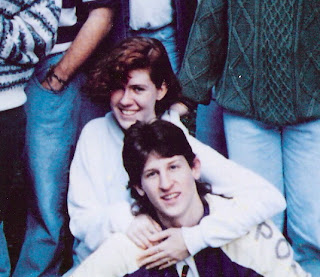 So the debates on gun control and parenting and bullying and rights and amendments and all that crap? Shove it. File 13. My friend Jaime, who once for reasons I have long since forgotten gave me a tennis ball with the word Nermal (and subsequent Nermals I and II when the campers dropped them in the pool or got them too muddy to handle) written on it in marker, is dead. That's enough to wrap my mind around for one day. I'll let the rest of you sort all that other rubbish.

Have I been sleeping?
I’ve been so still
Afraid of crumbling
Have I been careless?
Dismissing all the distant rumblings
Take me where I am supposed to be
To comprehend the things that I can’t see

I want to change
I need to shake up
I need to speak out
Oh, Something’s got to break up
I’ve been asleep
And I need to wake up
Now

Important: Kevin Sites in the Hotzone

We may see the news shows or listen to the radio. Some of us are NPR junkies and can't get enough. Others get up an hour earlier than we have to in order to catch the world service from the BBC.

Here's something else to add to your routine. It's a Flickr member who also is a contributor to Yahoo. He is called Kevin Sites, and he has taken some breathtaking and earth-shattering images from around the globe, specifically in the "hotzones" of the world. He has images from Sri Lanka, from Afghanistan, from Kashmir, and all of them remind us that behind the news stories and the wartime rhetoric there are real people that are just like us in the world that are suffering, rejoicing, and living, just as we do.

Y'all, I am scared of guns. I will admit that right here and now. Scared Stupid Of Guns. Before you ask, I have fired two guns in my life, a .22 and a .45 on a shooting range. I have had a shotgun fired in my general direction by two high school "friends" who had too much to drink and didn't recognize the car I was in coming up their driveway. I know people who own guns. I will say that I wish that it was illegal to own handguns in our country like it is in others.

The events yesterday at Virginia Tech have me thinking, and y'all that know me know that's a dangerous thing. But I just feel moved to post, so bear with me.

I did a little research this morning on the internet about gun laws in Alabama where I live now and I was horrified. Horrified. Just google "gun laws + Alabama" and you'll see what I mean. For that matter, just google gun laws + any state, specifically those in the south, and I think you'll get the jist.

Alabama has no law that requires adults to either store loaded guns in a place that is reasonably inaccessible to children, or use a device to lock the gun.

After I got out from under my desk, I went on with my research. Check out these pearls of American wisdom:

From an About.com article on the lifting of the assault weapon ban:

A free human should be entitled to own any gun that he or she desires, both as a basic human right to an effective means of self-defense against everyday evildoers, and as - brace yourselves, oh ye trusting masses - a hedge and defense against oppressive government... just as was intended by the founders of this great nation.

Meanwhile, I will hope for a respite from new idiotic and ineffective laws, and hope that someday soon our world will tilt back onto its axis so we can get back to enjoying the freedom we were promised by the many men who perished in founding this nation. Tough to envision that when you can't even take your fingernail clippers onto an airplane these days, but it could happen I guess. I'd like to live to see that happen, and here's hoping that you will, too.

I find it disturbing but unfortunately not surprising to share my country with people who truly hold these opinions. There was an occasion recently where a person who was a guest in my home talked about "having to shoot" a neighboring dog that was apparently a nuisance. Had to. No other choice. People who think that is a method for problem solving should not have easy access to guns. People who have severe mental illnesses that are going untreated should not have access to guns. I understand that there are those in this country who do take the time to be trained in the use of firearms and who have their weapons licensed and registered and permitted and whatever else you can do safety wise if you must own a firearm. But I'm sorry to say that there are far more that don't than those that do.

Just look at this statistic I found in an AP article this morning:

One city in our country had more homicides involving firearms than all of England and Wales. One city! And it isn't just one or two more, it's 533 more. That's 533 people that might still be alive today.

What does the rest of the world think? This sound byte from an Italian online newspaper comes via Yahoo News:

"The latest attack on a U.S. campus will shake up America, maybe it will provoke more vigorous reactions than in the past, but it won't change the culture of a country that has the notion of self-defense imprinted on its DNA and which considers the right of having guns inalienable," Corriere wrote in its front-page story.

I know that stricter gun control laws won't put an end to the violence in my country. It might curb the numbers, but I think that we are past the point where we could conceive of an end to the kind of horror we saw at Virginia Tech yesterday. It's in our culture, in our blood.

My thoughts and prayers are with the families of the victims, the survivors, and the family and friends of the shooter. My hope is that some sort of change, however small, will come out of this tragedy and make my country a safer place to live.
at April 17, 2007 32 comments:

So this morning when I came stumbling out of the guest room to feed the dogs there was the cutest little basket waiting in the hall! In the tradition of our mother, my sister...I mean the Easter Bunny had left me an easter basket with lots of yummy diet busting treats inside. Yay for Easter!

But wait...there was a toy in the basket, something that the "Easter Bunny" also used to always include when we were growing up. This toy, however, is a classic combination of humor, yummy bubble gum, and one of the symbols of the season, an egg laid by a chicken.

Little dude...err...dude-ette...errr....okay the chicken works like this. Twist its head off, insert no more than four of the bubble gum "eggs" (because to do so, according to the warning, would jam the mechanism...so true, isn't it?), then wind up Clucker and let it go. It walks, it...makes a grindy noise, and it poops out a bubble gum egg.

Music Monday: Fighters, in All Forms