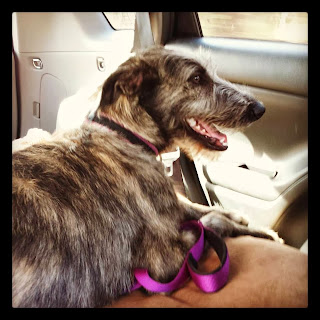 Her ILP name will be something with beansidhe (banshee) in it, but I don't know what that will be yet.

On Saturday, Anne and I drove up to Tennessee to pick up a five month old wolfie pup that was in need of rehoming.  Simon and I have always wanted a big fuzzy, wolfhound or deerhound, and so we jumped at this chance.

Daisy probably would have preferred that we hadn't, but since she doesn't have thumbs she doesn't get a vote.  She does, however, get loads and loads of extra attention and has resumed sleeping in the middle of our bed, pushing us to the very edges and taking all the duvet for herself.  Fair play.

On Sunday, Bryn made her first appearance with the Hounds of East Fairhaven, giving the crowds something to ooh and ahh over and HOEF a full time wolfie member for the first time in almost a decade.  She was a star, braving the cold, trolling for turkey tendons, and posing for loads of pictures.  There is something about a giant breed that captures the attention, even when she's only just a baby.

So far we haven't lost any thing to her voracious chewing except for a tiny bit of sanity when she chooses a toy that squeaks.  But even that is tempered by the fact that she makes sounds that resemble Lucas's Chewbacca as she chews...she is just hilarious.

We did a bit of puppy proofing before she came home, but for the most part we just keep an eye on her and keep her busy with appropriate things rather than wait until she's chosen something inappropriate to dissect and investigate.  While it has only been just over 36 hours, she has responded well to correction when needed and is just a big old growly rumbly furry lovebug that tried to climb onto Simon's lap for snuggles last night when she got sleepy.

We adore her and hope that Daisy will too in time...keep an eye out on the Lettuce for more stories of Bringing Up Bryn!
- November 25, 2013 No comments: