It's the most wonderful time of the...every four years (except for the Women's World Cup which is even better). The FIFA World Cup is going on right now in Russia, and what that means is I get a month of football on tv almost every day, and for the first two weeks, it's on 2-3 times a day!

Yeah, take a moment to feel sorry for my husband. He's not as into it as I am, even when his own country is playing. My country's men's national team didn't make it into the tournament at all, but I'm still hooked. I'm sure there are those that would criticize my choice to watch football instead of BECOMING VERY LOUDLY INVOLVED IN EVERYTHING THAT IS GOING ON IN THE WORLD AND THE UNITED STATES RIGHT NOW, but - and this is tremendous personal growth on my part that I can say this out loud on my blog - I don't care.

There is nothing wrong with getting lost for a good two hours at a time in a football match. It brings a lot of things into perspective and teaches lessons that I think are incredibly important in the current political climate. It's also good for my author brain to tune out of rhetoric for awhile and focus on fast-paced strategy. Trust me, you'll thank me when you read the battles in my fantasy novels.

But back to the topic at hand - how football can inform politics. There are the obvious things like the fact that nations that cannot stand each other somehow can set that aside for 90 minutes on a football pitch. That said, there are disputes that come out during these matches between these nations that teach me more about the wider world beyond our current president's playpen - sorry, country. For example, during the group stage match between Switzerland and Serbia, there was controversy over a motion made by two Swiss players of Kosovoan descent followed by a complaint about the referees for that match being nationals of countries that do not have the best relationship with Serbia. None of that made sense to me at first, but it prompted me to look further into the double-headed eagle sign that the players threw up after the goal, and by that to learn more about Balkan Politics. Now I pay more attention to the nationality of the referees at all the matches.

The differences in play style remind us that there are differences in cultures, in climate, and in the people themselves - but that when it comes to the offside rule, we are all the same. The introduction of VAR in this World Cup allows for the objective (hopefully) assessment of penalties and fouls on the field - but it is still up to the referee to make the call at the moment on the field, and regardless of how fair or unfair the call feels, it is what it is and they move on. They move on to play smarter and harder and to avoid stupid mistakes fueled only by emotions.

I'm trying to use the lessons in my own life. Resist and call out tyranny and discrimination and hate without resorting to penalties and red cards that do nothing but make the rage louder and more fury filled. Find another way - a more civil way, to use an oddly vilified term right now - to make my point and stand up for those who cannot. Does interpreting for rallies rather than screaming in the street and waving a sign mean that I am not truly committed? Hardly. It means I am doing what I can to bring the message to even more people that hopefully will join the resistance. Offering food and shelter to those in need for whatever reason is JUST AS IMPORTANT as confronting the evils of the world that left them in need in the first place.

I was watching the Mexico v Sweden match the other day, being called by Jorge Perez-Navarro who is well known for his passion and excitement as well as his seemingly never-ending "Gooooooaaal!" He had called the previous match for Mexico and was very excited for everything that the Mexican team did. Makes sense. But in the match with Sweden when Mexico did almost nothing that warranted any excitement or passion, when Sweden scored he let loose with his famous "Goooooaaal!" anyway - because that's what you do. I am certain that it wasn't the result he wanted (even though Mexico and Sweden both went through to the next stage THANK YOU VERY MUCH AND HOLY MOLY HOW DID THAT HAPPEN South Korea?!?!?) but it would do no good in his position to be surly (even though it is VERY clear which team a lot of the commentators are following - glory chasers. Anyway. Where was I?). That is civility, ¿verdad?

This is who I am, who my parents taught me to be, and - once more for those in the back - this does not mean that I am resting in my privilege or supporting fascists. This means that I know myself and I am true to myself, and that is ALL that it means. I use the Gandhi quote quite often: "An eye for an eye will only leave the whole world blind."

Now, if you'll excuse me, Argentina have just equalized against France and I have got some cheering to do for the second half. Allez Les Bleus! Vaincre l'Argentine!

(and with editing...Argentina have pulled ahead and I clearly need to leave this and get back to cheering on France!)
at June 30, 2018 No comments: 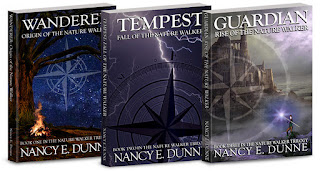 I waxed poetic in my last post about how long it has taken me to get to this point - years of living with this story and these characters - and how surreal it still feels. Wanna know what will kick that feeling of being just on the verge of an anxiety attack right over into full-blown WHAT HAVE I DONE?

One little post on social media, from a real-life friend who happens to be KIND OF A BIG DEAL in the Rennie world saying she can't wait to start the new trilogy in the picture she posted: The Nature Walker Trilogy. She is about to find out about Gin and Sath and Orana and all the rest. The horrible little voice in my head says that I am about to be exposed as the imposter I am. Exposed - by someone that is my friend.

Now, all of us living in the rational world know that none of the drama described in the above paragraph is realistic. She may hate the trilogy. But she may also love it. In fact, there is a good chance that she will love it. And if she doesn't, my world will not end. Right?

There is a good chance that a lot of people would love it, and if only I would GET OUT OF MY OWN WAY and let them experience it then they will love it and share it with their friends. But that's the rub - getting out of my own way. I suppose this is something that all writers (and artists and dancers and anyone of a creative ilk) have to face. The tiny voice in my head is firmly standing in the way of me returning to dance class. But on the positive side, the tiny voice in my head kept me from following a traditional publishing route, and so far I'm quite pleased with the results of indie publishing (or self-publishing). I have a great team that provides me feedback and editing and creative support - a team that the tiny voice can't touch. One dissenting voice in the face of a supportive chorus is drowned out most of the time.

I hope that my friend's post on social media will lead to more people giving Gin's story a try and falling in love with her and Orana. But most of all I hope she enjoys the story because that's why I wrote it and published it - for people to experience and enjoy. All the wow moments pale in comparison to that.
at June 20, 2018 No comments:

It's here! Guardian: Rise of the Nature Walker 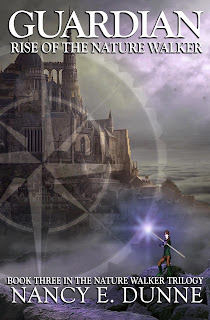 Well, I have to say that almost two decades ago, when I first started playing an MMORPG, I never would have guessed that experience would lead to the gorgeous book cover over there. Even a decade ago, when the late nights, guild raids, and TeamSpeak chats were just a happy memory, I was sitting on a manuscript that I couldn't share - wouldn't share - but it wouldn't let me go. It took another ten years for me to finish it, polish it, rip it to bits and start again. It was a Superginormous chunk of memory in my cloud drive. It turned into a private blog, and that's where the first beta reader not only gave me feedback but encouraged me to keep writing and keep working on the story.

Wanderer came first and is the most similar to the original superginormous manuscript. Everyone hates exposition, and that's what I thought Wanderer was...but it isn't, not really. It's an introduction to Ginolwenye - Gin for short - and to the world I created for her to inhabit. Next came Tempest, arguably the most dark, personal, and difficult thing I have ever written. The majority of those two books were written years ago, and only needed some revising.

Guardian was different. Guardian was the end of the story that I couldn't quite make myself write. At the time that I wrote the first two, Guardian was somewhere I didn't want to go because I didn't want Gin's story to be over. I wasn't ready to leave Gin's world. But, as people started to get to know her and became invested in her story, I knew I had to be brave enough to see this story through. And so, Guardian came into being. And here it is, launch day for this last book in the Nature Walker Trilogy, and I still can't believe all of this is real.

Funny thing about Gin, though. She isn't done just yet. She is just coming into her own - her birthright, her inheritance, herself. Gin has a lot more to do, and I can't wait for her to point me in the direction of her next adventure. For now, though, you can get your copy of Guardian by clicking on this link. Ta very much, y'all. Very much indeed.
at June 11, 2018 No comments: