Somehow this month's nano has been so hard for me. I mean worse than that time that I wrote for two weeks and then completely changed my WIP and still came out a winner.

Worse than last April when I almost abandoned what I was writing because in the aftermath of my dad's death I just didn't have anything to say. (Disclaimer: if you have read my upcoming Baskervilles debut as a beta reader, then you KNOW that I had nothing worthwhile to say.)

I have a fantastic character who is technically a ghost, and she is the most three dimensional of all the characters in this story. I have a tremendous MC who is darling and unsure and brave and afraid and everything that you want your MC to be so that she is not a Mary Sue. I have two other characters that I have lived with for four and six years, respectively, who should be able to just write themselves at this point. No real effort required.

And yet I always find myself 1-2K words behind my target. I catch up, and then somehow think it's okay to take the next day off. I am trying to be the director of the Hounds of East Fairhaven and perform on the weekends at the Georgia Renaissance Festival, but that is really just like hopping from hot mess to hot mess. Oh, did I mention that my school year at my day job is winding down, and I'm looking at expense reports and future planning and scheduling and all that fun stuff? Yeah, it's a real party around here.

[Here is the file room in my office suite because...well, we have already been over that. Soon here/my office will be the sofa in my sitting room in between bouts of HOLY HOUSE OVERHAUL, BATMAN to be ready for the arrival of some of my British family in July.]

So I have eight more days not counting today to get this manuscript up and moving - two of those days are Renn Fest days, so make that six days. How do you find motivation when the genuine threat that what you're writing is awful looms? This is not a new piece - this is the last in a series, and it has a lot of eyes on it. It's like the metal footfalls of the Cybermen are tromping through my head, trailed by the Daleks, Reavers, the Borg, Control, and the entire bloody Empire - and all I can do is sit and wait for it all to arrive.

I am hereby outing myself as trying to learn Klingon. Yes, that is the language created for one of the fictional races in Star Trek. Yes, it does have a lot to do with the fact that Lt. Commander Worf is one of my favorite characters from Roddenberry's creation. But there are two other reasons, one that should be plain if you know me and one that might not be so plain, but will make sense, again, if you know me.

Reason the First: I love languages. When I was little, I had a book - it was called The Book of Knowledge - and the book had listings of most of the nationalities of the world and their languages, and gave a few sample words in each language. It fascinated me to know how you say "Hello!" in Spanish or "Pardon me," in French. And then there were the languages that did not use the same alphabet that English does - languages that use Cyrillic characters, for example - it was like code! Trying to see similarities that weren't there between those characters and the Latin script that makes up the languages I understand filled my afternoons as a kid. It was a true tragedy that my school system didn't teach languages before high school as so many do today, or I would have taken every single one I could fit into my schedule.

It is no wonder that I do what I do for a living - one of my best memories of the time I have been in my current job was a day that my co-interpreter and I were watching music videos in American Sign Language on YouTube and being just overcome with the choices the performer was making. We were out of our first language altogether and just allowing the beauty of our second language to live and breathe on the screen and then on our own hands as we tried to recreate what he had done first - the efficiency of his sign choices and the beauty of the meaning that he conveyed was just more than I could take. ASL to me is like magic - linear language becoming three dimensional and alive.

Who is surprised? No one, I'm sure.

Reason the Second: I am a very mousy person. Very few people have experienced truly ANGRY me who is so ANGRY that she expresses that ANGER. I am introverted and shy, and I hate that about myself because it seems that it is NOT THE RIGHT WAY TO BE, according to most of the people in my life. I am more expressive in ASL than I am in English, oddly enough, because ASL lends itself well to that sort of communication. There is no whispering in a visual language.

Klingon is harsh. It is a gutteral language. It is loud. There aren't words for Hello or please or thank you. I still won't speak it out loud unless I am asked how to say a particular word. It is a language whose culture is completely opposite of who I am every day, and I love that. But y'all, the best thing that has happened since I started this process has been the ability to understand some of the Klingon used on the different programs in the Star Trek world.

This new understanding of aggressiveness and harshness is helping me with some of the races that I have created in my novels - and it is helping me create languages for those races. While Sath may seem like a pussy cat, he has another side to him that is more rough and animalistic, yet developed - that is how Qatu'anari should be, and to date, it isn't really. Maybe the Klingon will help me with that, as well as with other races that live on the Dark Side of the World that has yet to be discovered, or with D'leesh spoken by the dark elves, or even Eldyr. This makes my heart so happy.

Conclusion: Am I nerdy? Oh, no question. Most definitely.

Will I be able to fire back at you in Klingon when you call me a nerd, with that derogatory tone in your voice? 'oH net poQbej Har SoH!
- April 11, 2019 No comments: 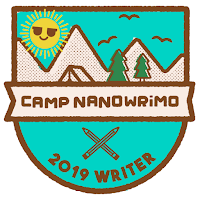 It's another Camp Nano, y'all, and I'm heading out into the metaphorical wilderness with my shiny copy of Scrivener for organization (that I'm not supposed to be doing but since I'm already a panster here we are) and my tried and true Google Docs for actual writing. This month's foray into madness is the next (and probably last, really) in the Clobberpaws series, and is about our Ciaragh. More wordcounts and general angst can be found over on my Twitter page, but for now, I'm still sorting out the already planned material (which is none) and working on the first chapters (always the hardest).

This will also include a special character, Roxanne, whose mom won the right to have her Bridge Angel included by winning an auction. The funds raised support the Greyhound Health Initiative, and I couldn't be more pleased with the outcome. So far I am loving getting to know Roxanne through her mom and working her into the story. So much fun! Clicking on the picture above will take you to a page where you can follow my wordcount progress if you are so inclined.

In the meantime, an admission:  Yeah, I stole the title from S4Ep10 of the Magicians, "All That Hard, Glossy Armor," or, as our DVR explained, "Margot hits her step count." No spoilers but HOLY MOLY that was another amazing musical episode and I only love this show more.