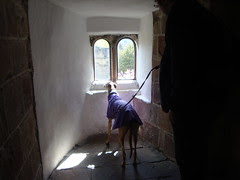 Is this the way out?
Originally uploaded by Nancy Dunne
As we wind down July and head into the hottest month on the planet in every other place but England, I wanted to take a minute or two and catch you up on what's been going on here in our little corner of this damp island.

June was a bit of a wash, really. For those that don't know (and I'm going to apologize here to my more sensitive and MALE readers, this is heading into serious TMI territory), in early June I found a lump in a place women never want to find lumps. We did the responsible thing, of course, and headed to the GP. Turns out she couldn't definitively (I think that's translated as "without fear of a lawsuit") say what it was, so we were "fast tracked" to the Breast Care Clinic at Airedale Hospital over in Steeton.

PS-Steeton is a lovely village, and the staff at Airedale were just fabulous.

Why is "fast track" in quotes? Because here being "fast tracked" means that you'll be seen not more than two weeks from your referral appointment. I was seen on the day before the two week deadline, so I suppose that's pretty "fast." Nevermind the absolute panic and dread that had set in...a friend of mine here said that when it happened to her she'd planned her entire funeral before she got in to be checked out. I can relate.

The first something turned out to be mostly a nothing, a cyst to be exact that they gave me the option to have drained with a needle. Seriously? Y'all, don't ever give me the option when it comes to a needle because I will say no EVERY time. This time, though, they asked me what my husband might say...to which I replied that he'd want it drained and let's just get on with it. I came away from that thinking I'd truly turned a corner and Holy CRAP am I brave or WHAT?

Then I found out about the second somethings.

Seems that when they did a mammogram (which, to the delight and amusement of the techs, I referred to as Twister Plus a Vice Grip) they found five little itty-bitty things that they wanted to check out further. Okay, more xrays? Um, no, we need to remove them to check them out.

See above dire panic and funeral planning. This time I went so far as to pick out flowers.

A week later I was in to play another round of Vice Grip Twister while they did what is politely called a Needle Core Biopsy. I don't really know what they did, to be honest, I looked the other way, stared at the poster of Scotland on the wall, and tried to ignore the sound of the needle as it removed sample tissue. Actually, it reminded me so much of a staple gun I was finding myself amused a few times remembering staple gun fights in the theatre shop when I was in college...but I digress.

Again I was on top of the world, I'd survived the removal of 12 tissue samples and was told they were just going to get one more. Yeah, they really could have kept that to themselves. I remember looking at my hand and thinking that it was amazing I'd held onto the machine this long without losing my grip...and noticed that my hand was now turning a weird color, kind of greenish...and then the yuck hit and I told them I was feeling sick.

Did I mention how awesome the staff there are? They did the last one, removed the Jaws of Life, and one of the sweetest nurses EVER literally mopped my brow until my color came back.

The results came back, and I think the best way to tell you is to quote the doctor directly: "We would recommend at this time that we do not treat you any more, as the samples were all normal."

I need to take a moment and admit that I clapped my hands.

In between these two appointments, a former co-worker and friend of mine, Christine, came to visit. In a week, we saw Keighley, Leeds, York, Haworth/Moors, Newcastle, Edinburgh, and Manchester. You can see pics of that week here. Now I'm starting the countdown to our holiday in America in October, and thinking on ahead to our move back to America next Spring...but not too much. There's still allegedly a tiny bit of British Summer left to come, and if you blink you might miss it.