Those of you that are familiar with me know about my love for all things camp-related and Nanowrimo-related. So the fact that I am a die-hard Camp Nanowrimo Participant should be no surprise, really. Every year I do three rounds of Novel Writing Month work, two for Camp Nano and one for Nano Proper in November.

One thing I love about Camp Nanowrimo is that since it is set up like virtual summer camp you get the daily inspirational emails in the form of #CampCarePackages and they are jam-packed full of advice that you can use even after camp is closed for the year. I wanted to share the care package from Friday because it speaks to who I am as a writer on a very deep level. Enjoy, and don't forget your bug spray or sunscreen. It's brutal out here in the wilderness.


I’m the kind of creator that doesn’t experience writer’s block. I suffer from what’s known as writer’s laziness—and I know I’m not alone. When this happens, I can’t even force myself to get my work done. But instead of sitting and staring at a blank page, I’ll give myself a set number of minutes to indulge in media that will inspire me to get back to work. Writing a romance? Watch your favorite romcom! Knee-deep in horror land? Find a book that has the same kind of spooktacular themes you’re exploring. I often find that’s enough to jumpstart my writing. 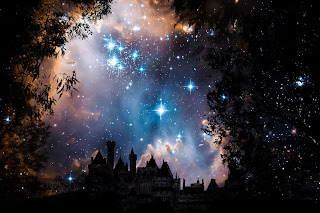 So today, instead of focusing on the holiday (that will come later when the yahoos in my neighborhood start lighting fireworks and my dogs think that we are under attack), I'm focusing on something a friend of mine said on Facebook - that today she is celebrating living in a country where she has the ability to create art without the government infringing on it or stopping it, at least not at this point anyway. (Apologies to Erin for that ugly paraphrase of the beautiful post she wrote this morning.)

My art is writing. I'm not a Tolkien or a JK, mind you, but I do find a great deal of katharsis and calm in writing. I let my characters do things I would never have the courage to do. I let them say things that I think ON A REGULAR BASIS but would never say because, well, SOUTHERN AMERICAN. They go places I only dream of going and live in worlds that if discovered to be real places - well, I'd never come back out, is the thing.

I create those sentences and actions and places. I create those characters - they may be based on real people, but I have given them life outside of the people that served as inspiration. I do all these things in this terribly creative art form, but it isn't usually called art. Why not? Is it less art because it is words? Because thank goodness for spell check? Because I have beta readers who point out to me that "a king would never talk like that" or an editor who finds the umpteenth time that I have used the phrase "beat feet" instead of hurried or ran? Because it relies on the imagination of the reader to give the characters voices - even though they talk to me in my own mind with their own voices, their own intonation, and their own accents?

Maybe it's because I want to hide behind my work - I am the first one to say that I'm not a REAL writer or author. But that's not the case, it seems. I am an artist - words are my paints, the laptop is my canvas. I put the notes of the words together to form chords of paragraphs, and those paragraphs link together to form the sonata that is a chapter. I choreograph my characters on the stage of the world I've built.

Well, either an artist or a fascist dictator, which brings me back to the holiday today and the fact that I need to think about shutting the blinds and finding something loud to watch on telly - or diving back into Orana, and only coming out when I absolutely must. Because I'm that kind of artist, and my writing is my art - or because we are four days into Camp Nanowrimo and I don't want to get behind.
- July 04, 2018 No comments: