Didn't I tell you not to blink? 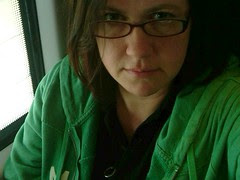 Heading home...
Originally uploaded by Nancy Dunne
Well, after the exciting and scary and revealing events of June and early July, I was hoping for a bit of calm. A bit of warmish weather. Peace. I was going to enjoy the British summer and relax after staring my own mortality in the face twice in as many months.

With August came family drama that I won't rehash here save saying that I will go to my grave being proud of myself for sticking to my guns when it came to getting what I needed, and proud of my husband who remains, to this day, the most romantic and wonderful man on the planet. I felt our family solidify over the course of some very ugly and potentially soul destroying days, and I'm thrilled to report that we've come out the other side intact.

And that happy, smiley British summer that the cider ads were all touting on telly? Yeah, apparently that was over last week but no one sent me the memo. We're now fully into the August Bank Holiday weekend and I was wearing a scarf to work this morning. A Scarf. In August. I'll leave you Southern Americans a moment to fan yourselves madly as that thought settles in.

Today was a lesson in patience as far as getting to work goes. I was out of the house on time (two hours and fifteen minutes prior to my official start time at work) and made my bus as well as the train from Keighley to Leeds. However, forces outside of my control and all the way down the line at Fitzwilliam (remind me to tell you why I hate that town one day...it has to do with a long walk to a greyhound event and quarter-sized hail in June) conspired against me. I boarded the 0940 Leeds to London KX at 0925 (along with about a million happy Leeds Rhino fans and others wearing kit I didn't recognize) and settled into the one square foot of space left in a vestibule to read while I waited to arrive at Wakefield Westgate at 0952...however, at 0951 we still hadn't left Leeds.

A broken down train at Fitzwilliam (just typing the name of that town makes me go all stabby) had caused delays up the line at Leeds...delays that turned into cancellations. When it became apparent that I wasn't going to leave Leeds until well after I was supposed to start work in Wakefield, I called in and started looking for a train BACK to Keighley.

At least the laundry's out on the line.

So I think that summer is officially over and we can now slink into my favourite season of them all, Autumn...as well as start the countdown toward our American holiday at the end of October. Life isn't GOOD yet, but it surely is getting BETTER every day.