Further thoughts on the past few days 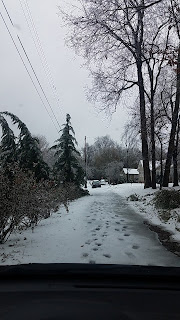 So a few more things have come to mind since I am now back in my warm office and sipping HOT cider. Like a first-worlder. Like a person who lives in the wealthier part of my town and got their power restored first while Simon and I waited and shivered.

Wow, that escalated fast. For anyone concerned that I was just having a bit of a lie in on Monday or that I decided that I just didn't want to turn up this morning - have a look at that picture and then remember that I drive a Honda Fit. We got a bit stuck when we dropped the girls off this morning and - small car FTW - Simon was able to push me off of the snow drift I'd become stuck on because I drive a matchbox car. That was my street on Sunday afternoon I think.

So things we learned:

How to avoid Whamhalla and other Holiday Fun

Oh, y'all. It has been a DAY already, and it isn't even 1pm yet (almost, though). Let me just recap the past few days for you, my Lettuce Readers.

Last week we heard that there was snow moving into the area over the weekend. Yucky and cold and wet Saturday, snow and sleet on Sunday, and moving away by Monday. Great! Now, normally I like a snow day as much as anyone else does, but not this week. This is final exams week at work and that is a schedule that shall not be interrupted.

For those that weren't sure, that was the point at which Mother Nature asked the southeast to hold her adult beverage.  Sure enough, the cold/wet/freezing happened on Saturday and snow overnight Saturday/into Sunday. What also happened was that at 5am on Sunday morning, Simon woke me up to tell me the power had gone out.

If you were not raised in the South or you haven't lived here long, what happens here rather than a "snow event" is an ice storm, where layers and layers of ice coat everything that it can find - including trees and power lines. (Do NOT get me started on a country as rich as the US that can't seem to understand the UNIVERSAL benefit of burying power lines.) So anyway, the freezing rain and sleet make ice that coats the trees and causes them to bend and sometimes break. It also coats the power lines and poles, making them so heavy that they too sometimes bend and break. If you can avoid that horrific combination, watch out for the ground which will also be covered with - you guessed it, ICE. That makes walking and driving very dangerous.

Let me just take a moment here to ask those that want to make fun of southerners for not being able to "drive in the snow." Just shut it, okay? This is not the snow you are accustomed to - I can drive in that, and did when I lived in West Virginia. This is trying to drive on a sheet of ice that is masquerading as a road. It is very dangerous and while most of us down here are taught to drive on it safely back in driver's ed, we are also taught that it is smarter and safer not to attempt it at all.

Right. So anyway, back to me.

5am Sunday, the power goes out. By 5:19am on Sunday I have reported the outage to Duke Energy. I got back a canned response that they were assessing damage. Groovy. Tuck in the duvet and try to go back to sleep. By 3pm Sunday when it was getting a little chilly in the house, I checked the webpage for Duke Energy again. The little triangle by our street still said Assessing Damage an hour prior while another similar one about two streets over said On Site. But this time, the one a few streets over said On Site still and ours said Enroute. Fantastic! This is the service we are paying so much to have.

Well, not so much. Nothing happened by 4pm, or by 8pm Sunday. We were still not freezing but it was getting uncomfortable, so we decided to go to bed around 10. I checked a few more times before I fell asleep and nothing. It was still Enroute. From where? Roanoke?

On Monday I called into work and Simon and I decided to formulate a plan - buy a non-electric heater or a small generator and a small heater to get warm - buy a camp stove so that we can have coffee and warm food. Surely when we decide to do something like that, the power will come on, right?

Not hardly. It was still Enroute until late last night when they sent another text message that said that it would be fixed by 11pm tonight. So we did what any normal people would do - we gave up on the generator and heater and crashed at a friend's house.

But what did we learn - and are still learning, because I'm not expecting that power to be back on until 11pm on the dot - from this experience? Several things.


So if you were affected by Winter Storm Diego (Carmen San's wayward brother), I'm thinking of you and holding you close and hoping that you have power and heat...and that you aren't staring down the total cleaning out of a refrigerator and freezer. Ick. But I haven't heard the Wham song, and I am in my warm office with heat and internet so this holiday season may get on track sooner rather than later. I just hope it isn't sooner that our power coming back on...
at December 11, 2018 No comments:

In which my inner language geek speaks...


People ask me all the time why I do what I do - lately, my answer is to carefully shrug my shoulders whilst trying NOT to reinjure my right elbow or smack my right hand against anything - but the answer, if I'm honest, is language, or languages. I did not go into interpreting because I have a need to help people. I did not go into interpreting out of some need for social justice or a desire to work in a disability-related field. I don't see Deaf/HOH people as needing help or as a disability community - I see them as a language minority. I went into my current field because it means I get to work in my second language every day - to the point that I think, dream, and even speak verbally in ASL (take a moment and feel sorry for my husband, won't you?).

Well, today I had a moment when I just got all giddy and, since interpreting tends to be solo work for the most part, I had no one to share it with that would understand it. I was watching some British Sign Language videos on YouTube in the name of professional development and I had just watched a video showing how to sign 'meeting' in BSL - and I got it. I don't mean I could see and understand the sign and then reproduce it. I mean I looked at it and due to my knowledge of ASL, I could understand WHY that was the sign for 'meeting.'

Last week, hubs and I had a discussion about why it is harder for some people to learn a second (and third and so on) language than it is for others. I likened it to the reason why it is hard, at times, for Deaf/HOH kids in school to learn English without a firm foundation in ASL first. If I had not had such a good education in not only vernacular spoken (American) English, I would not have been able to understand ASL to the point that I could then extrapolate that onto BSL and that video. You cannot learn a second language if your first language isn't strong enough to form comparisons and, to use my favorite metaphor, hooks. You can't learn ASL without a strong foundation in English, for example, to hook that new set of grammar rules and vocabulary to what you already know.

For people who say that isn't true, and that as long as you have a rudimentary understanding of your native or first language you can always learn a second language through study and repetition, sure, you can I suppose. But think of it this way: I never had a good grasp of mathematics. Never. I mean I can't even do the four basic functions without having to get a calculator to check my answers. I have no confidence in my own ability in that subject. I have no solid foundation in maths, so when I went to hook my new level of maths (Algebra and the like) into what I already knew, the hook fell. The foundation wasn't solid enough to hold it.

But my borderline obsessive love for learning languages has come from the fact that growing up I not only knew that you say 'I was going to the store' but also that it is not acceptable to say 'I were going to the store' and why. Miss Pritchett and Madam Gring-Whitley would be proud to know that they were right - I hated those verb conjugation sheets, but they helped me understand why you must change the form of the verb in order for the time component of your message to make sense. It helps me now when I remember to add the sign that indicates when the verb is happening, has happened, or will happen - so that I am clearly understood.

So back to the BSL video - it was because I know the ASL signs/classifiers for a person, the concept of 'meet' and 'meeting' and because I know what the word meeting can mean in English, that this sign made perfect sense to me:

That is building on your foundation. That is what made my inner language geek so very happy. I love it when I come across things like that and often don't make that connection until afterward but man. That is why I do what I do. THAT RIGHT THERE.
at December 04, 2018 No comments:

Music Monday: Fighters, in All Forms