Just around the bend... 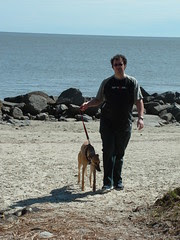 Simon and Daisy, a photo by Nancy Dunne on Flickr.
It seems like it was just yesterday when I took that photo over there. It was at Sandy Paws 2007, and I had only had Daisy in my life full time for one less day than I'd had Simon!

Five years ago today I drove to Hartsfield International Airport to pick up Simon on his second ever trip to the United States. I was scared to death...that he wouldn't like me, that I wouldn't like him, that the dogs would be TOO MUCH, etc. etc. etc. But everything changed as soon as I got out of the car and bent my neck backward for the first of whoknowshowmany times to hug him. It was right and perfect and it still makes me hoppy to think about.

Hoppy: to be in a state where one's feet simply cannot remain on the ground. Eg: me in a fabric store.

I was scared and nervous and and and to pick up our Mei Mei at Sandy Paws the next day, but we headed on over to the villa where Cathie and Anne were to get her. Once again, all that melted when I had her precious little self in my arms, even though she wanted to run from the crazy lady strangling her.

Five years, gone in a blink...and just around the bend, Daisy in my arms and picking Simon up at the airport. Life is good...or will be, just around that very happy bend.
at February 28, 2012 No comments: 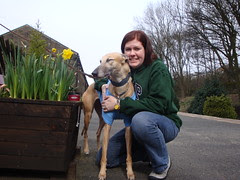 My Mommy is a geek. Seriously., a photo by Nancy Dunne on Flickr.
I went across the way today to grab lunch at the student center and was struck by how WARM it is. WARM, y'all. Like open the sun roof and put Kid Rock on the radio, warm. Like I can't believe this time last year I was freezing, warm!

I was reminded in that short walk of one of the reasons why I wanted to move our family to the United States. While there are many, MANY lovely things about the UK and England in particular, and I do miss parts of it every single day...the weather is not one of those things.

61F in February. 16C. That's the great British Summer if you live up north like I did. I had to TAKE OFF MY SCARF outdoors because I was TOO HOT. (I didn't even bring a coat today!)

Oh, and in other news...she's coming home. Very soon. Like next week soon if at all possible. And then she can think I'm a dork and a geek and whatever all in person, and it will be okay, because she will be HERE. With ME. Mei Mei. Life might be starting to get a little bit...good?
at February 17, 2012 No comments: 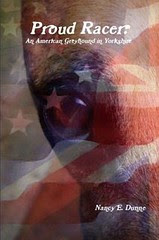 An American Greyhound in Yorkshire Cover, a photo by Nancy Dunne on Flickr.
My little girl, my psycho puppy, my sweet Mei Mei who has gone so native she's forgotten that cookie means biscuit...is coming home to me and Clown VERY VERY soon!

I'm not mentioning anything else because I've already jinxed that once, and we didn't bury St. Joseph in the backyard yet. Mainly because we don't have a backyard, and we'd have to bury him upside down in a plant pot. And then the plant pot would get sold and .... yeah, I wasn't going to mention that, was I?

Coming soon to an airport near me...FTH Oopsie Daisy, world traveler and my baby girl. I might even get her some choccie bikkies to celebrate.
at February 15, 2012 No comments:

Recognize that young lady there? 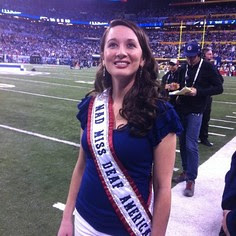 Miss Deaf America at the Super Bowl, a photo by Nancy Dunne on Flickr.
No? I didn't think you would. She's Rachel Mazique, and she is the currently reigning Miss Deaf America. She was invited to perform "America the Beautiful" and "The Star Spangled Banner" in ASL at Super Bowl XVII this past weekend in Indianapolis.

Are you scratching your head now, as I was, wondering how you missed that? Well, let me tell you why. You missed it because NBC chose to film (in close up) Blake Shelton, Miranda Lambert, and Kelly Clarkson instead as they simultaneously performed the songs in English.

Oh, no wait, they did manage to film the choir of children that were singing with Ms. Clarkson.

What does that say to the Deaf community that tuned in to watch because they had heard she would be performing? It certainly explains the lack of sign language interpreter during those two parts of the pre-game festivities...I guess they thought they had that little bit of THE LAW covered when they asked Ms. Mazique to perform.

I'll tell you what it says. Your language is an afterthought. Your language interferes with the general public being able to gaze longingly at pretty celebrities whilst they sing. Your community is not legitimate in our eyes, so we invited her as a token gesture which has NO actual meaning.

Think this is wrong? Yeah, me too. If you click on the link here you can sign a petition demanding that the NFL and NBC offer an apology to Ms. Mazique and the Deaf/HOH community for this blatant snub.

Marlee Matlin tweeted about the ability of the camera people to capture M.I.A.'s rude gesture but not Ms. Mazique's performance.


When we expected some beautiful sign language during the #SuperBowl National Anthem, we got instead a "sign" during M.I.A.'s rap. Ahem.

This is a good one, though...and it has reminded me to check my calendar because we may just be coming up on Pancake Day!