Well, I'm back at the DayJob and so far, no one has died, exploded, or been left (for too long) without the accommodations they are supposed to have in class. So far. I mean, it's been less than a week, so fingers are still crossed.

I'm getting back into the WritingJob slowly but surely. I'm in-between works in progress at the moment, so I'm back to investigating marketing, working on the Other Stuff involved in being a writer, and making sure all my ducks are actually ducks and are heading toward a row, at least. Ads on Facebook, Amazon, and elsewhere. Keeping up a daily appearance on Twitter keeps me grounded and writing at least 140 characters a day, if not more.

I would be lying if I said it was easy, though, navigating this new normal without my mom. When my dad died in 2018, that year's holiday season was tough. The last Christmas we tried to have at their house in 2014, when he caught the flu and was in bed, asking me if I knew his daughter Susan and if I could find her for him was awful. But after he died it was more tough for me because I could see how much my mom missed him.

I didn't have the same relationship that my sister had with our parents. She was much closer to them in many ways - she and Daddy shared a profession, a passion, and a calling to ministry that I didn't and still don't understand. She was there for Mom, doing all the heavy lifting after Daddy was forced to stop doing it by his illnesses. But Mom was my confidante, my "ride or die," my go-to when I didn't know where else to go, and her absence is heavy - her silence is deafening.

But these three little pictures of her as a little girl - out in her Sunday best for a photo - remind me to keep moving forward. There is always another bonnet that needs putting on - metaphorically speaking. They also remind me that I'm not really as alone as I feel right now. If you look at the picture on the right, there is the slightest image of a man in a flat cap, probably tying little Martha's shoe - I have no way of knowing, but I like to think that is my grandfather because it gives me hope. Mom was a little girl with a daddy that tied her shoes, just like I was, and she weathered so many more storms than I ever will.

Not really a New Year's Resolution - more of a reminder. It's never as bad as it seems, and if so, it can only get better. 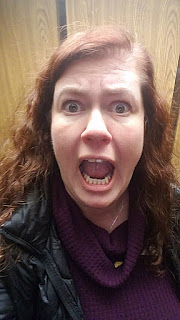 [Disclaimer: this photo was taken in the elevator upon leaving the testing center at work last semester during final exam week, after a harrowing overwhelming normal shift helping out.]

Has anyone seen winter break? How am I now mere hours away from being back at the DayJob for another semester? That's my first here we are again.  Ready for another one?

I have a book launching at the end of this month. The. End. Of. This. Month. The second and (at least at this point) final book in the Tales from the Forest War series, SCORCH, is due to be available on Amazon (in ebook and paperback) on 31 January.

What that also means is that it should open for pre-orders on 25 January and that I need to have it ready to go by then. 19 days from today. It's in final beta now, then will have one more quick round of edits and then BAM, out into the world.

Ah, the life of an independently published author. Hot on the heels of THAT here we are again is another one - the project that I worked on during Nanowrimo 2019 has become the introductory novel in a new series and new universe - Arcstone. That first novel, Rift, is tentatively slated to be released for pre-order at the end of February because I really wanted to have it release on 29 February. So, it is in the first beta now, has a round of edits and then a second beta if I have time and then editawholelotmoreandthenBAM! Yeah, I may need to rethink that.

And, finally, here we are again, in a new year with new hope and renewed fervor and all that stuff that floods our senses and souls at 12:01am on 1st January.  Or at least that is where we should be. Me? I'm still in that elevator, hoping that when the door opens, I will be on the right floor of the right building.