All I'm gonna say is I saw this movie finally and it blew me away. I've been on the email list, I'm a FB fan, and I couldn't believe that it was being premiered at UGA while I am in the states. GO SEE THIS MOVIE. I came away from it with a happy reminder of my second family, my second culture...and with stabbing, stinging pain at not being a part of that anymore. Go see the movie and hire a deaf entertainer. You'll be glad you did. Both.

Verbal Torrents in the Train

Hello from COLD Keighley!
Originally uploaded by Nancy Dunne
I was taught, in my undergrad, that if you are ever in a room with a Deaf/HOH person that you should be signing if you can as well as/alongside of speaking. I attended Deaf Club events where I was one of only a few hearing people, and I got to feel what it was like to being the odd person out who doesn't understand the conversation.

Today, on my ride home on the train, I had a taste of that feeling again. I got on and started looking for a seat. First car was full to the gills so I moved on, but got stuck in the vestibule between cars. There were two women there with their pushchairs blocking most of the passage way through. They didn't notice me at first nor did they make any effort to clear the passage, so I stood on my toes to look past them into the next car. Seeing it was full, I let out a frustrated noise that unfortunately got their attention.

One of the women, looking at me like I'd sauntered over and snatched her bald-headed for blocking my way, started huffing about and trying to move her pushchair. I immediately apologized for my outburst and made it clear that the noise I'd made was frustration at the full train and NOT at them. I chose to stop talking before I said "...not at you two, since you're taking up all the room in this walkway and no one can get through due to your decision to not fold up your pushchairs, even though your children are in your arms..."

Anyway, I decided I'd just stand. It was only about 15 minutes to where I was going anyway. The women went back to their conversation...in French. Aha! I thought, that's why they looked at me like that, maybe they didn't understand me! I was all set to launch into self deprecating inner monologue, and to wonder when I could have ever become so arrogant as to assume everyone on a train would speak English, etc., when I happened to overhear something I recognized. I can't quote it exactly because my French is really abysmal at best, but the jist was that the one woman was wondering aloud why that stupid American had thought it was okay to talk to her in English.

Properly incensed, I glowered for the other nine and a half minutes until the train stopped. How dare she? How did she know I didn't speak French fluently? Etc. etc. etc...until the cold air hit me in the face and caused me to really think about what had happened. All I'd needed to say was "No no, that's okay," when she started to move the pushchair rather than, "No no, that's okay, you're fine where you are, that noise I made? That (insert sound of frustration here)? That totally wasn't at you, that was at the full train, that's all. Sorry about that." Yeah, I would have rolled my eyes at me too. Ugh.

But more importantly it reminded me that I never know who might sign, and if I'm going to say something I should make sure I can say it in front of whomever is around.
at February 11, 2010 No comments:

Sort of, anyway…I was working on posts for my ASL VLOG, Nerda’s World, and Daisy came downstairs to see what I was doing.  So, for those that know and miss the little Psycho…here she is: 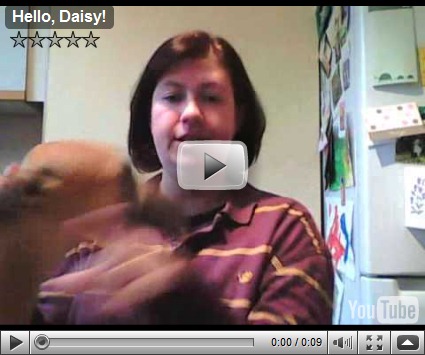 I'm a funny baby!
Originally uploaded by Nancy Dunne
My brother in law Dave beat me to the punch in sharing about something that happened while he and Susan and Joy were visiting us here in Yorkshire last month. Okay, let's call a spade a spade...I've had plenty of chances to write this post since they left, and just haven't. I could make excuses like "I missed them after they left and it was too painful to write" or "I've been up to my ears with work and getting the house ready to be viewed" or even "my trial sub of MSOffice expired and I lost data," but the truth is that I have been neglecting my Lettuce. And so, in a sort of an echo, let me share with you the rest of the story that Dave cleverly wove into his sermon yesterday.

We were sitting around being amazed that Joy has learned several words, not the least of which is "sock." Susan was keen to show me, while changing Joy's nappy, that she can now keep my perfect niece occupied by asking her what her socks are called and waiting for Joy to respond. It's always a good idea to keep a 13 month old occupied as often as you can, because it lessens the number of times said cherub wiggles off of whatever he or she is perched on in a desperate attempt to GET AWAY.

The conversation shifted to include the fact that, as Dave mentioned, Joy has yet to say Mama directed at Susan. I heard her say it a few times, but it wasn't while she stared adoringly at my sister. More realistically she said it to her mittens, but at least she's saying it. She calls everything either socks or kitties (imagine Daisy's reaction, since to her kitty is something bad that will scratch her eyeballs out, when Joy toddled over and lovingly called her KitKee!) or Dada. Simon mentioned that maybe he thought Joy was just calling Susan "Sock" because, after all, it starts with an S and seems to be something that Joy loves.

My imagination was lit like a powder keg. I mentioned the name of the book that Dave talks about in his blog, but also said that I could imagine Joy in about 13 years, an emotionally turbulent and possibly petulant teenager, gazing into her sock drawer, brows furrowed and knuckles white..."Are you there Sock? It's Me, Joy...why won't you answer me???"

Okay, maybe it was only funny to us.

We had a great time with Susan and Dave and Joy. I had thought and planned and worried over what we could do while they were here to make them absolutely LOVE the part of England where we live...but it turns out that wasn't what the visit was about at all. It was about hanging out with family. It was about watching Joy experience a new country. It was about taking notes for when Simon and I take trips with the children we hope to have.

And it was about the smile you see on that little face in the picture above, and the laughter that followed.

Love you, Dave, Joy, and especially you, Sock. To absolute bits. Thanks for a fantastic visit. See you in a few weeks!
at February 01, 2010 No comments: