How Gaming Levels My RL 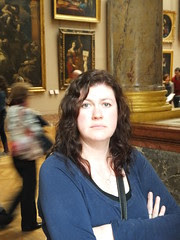 Tired and Fussy, a photo by Nancy Dunne on Flickr.
First, let me say for the .0000 of you that are Lettuce Readers that didn't know, I'm a gamer. I play Massively Multiplayer Online Role Playing Games (MMORPGs). Currently I play Everquest and Star Wars:The Old Republic but I have toons (Avatars, characters, etc) running around in Jade Dynasty, World of Warcraft, Guild Wars, Runes of Magic, and probably Free Realms and Shaiya. I say probably because those two...oh, and Perfect World International as well...those THREE didn't hold my attention long enough to count, really. Now then, disclaimer done, on to the post.

Simon and I are currently on a long-overdue honeymoon. We started in London on the 17th of May, flew to Paris on the 19th, and have just returned to the UK yesterday. We're currently (as I type this) at his folks' place up in Newcastle for a few days before heading off again to spend the rest of our trip in one of my fav cities on earth, Edinburgh.

The picture to the right, there, was taken last Monday. We went to the Louvre because it was chucking it down with rain (dontcha love Yorkshireisms?) and we thought it would be a good way to stay dry and see Paris. Dry, yes. Massively huge with ridiculously hard floors and lots of steps? Yeah, sadly.

So...onto how "Gaming Levels my RL" (Real Life). The idea for this post came to me as Simon and I were learning how to navigate the insanity that is public transport in Paris. There is a train, called the RER, a subway of sorts called the Metro, and then a tramway that thankfully we didn't have to even think too hard about while there. We had gotten turned around...for about the millionth time...when I took hold of the map and started navigating. We found the right transit line and sat down, and Simon mentioned how good I was at navigating. I started thinking about where I learned to read maps with such ease and came to the conclusion that it happened in the old days of Everquest.

When your character got killed, you had to run back to where you died and 1. hopefully get resurrected and/or, if no "rez" was possible, 2. collect your things. I spent a LOT of time running all over the game world of Everquest (Norrath) and most of that time the in-game map was superimposed over the view of my toon running. Map reading should have been a skill set in that game. I would have been a Master Mapper.

Okay, that sounds too much like a hip-hop performer gone very wrong. Moving on.

The revelation about my Master Mapping led me to think about the other places in my life that my gaming experience has helped me level up (gain experience and progress to higher ability and content) in my real life. I came up with two more things that I'm good at in real life that I think I can tie to gaming.

The first one (or second one, really...that is counting which is part of Math, in which my skill level is a fat (0). Anyway...): Navigating crowds and new places without drawing agro. "Drawing agro" is a gaming term for moving your toon too close to something that wants to eat you. It realizes that you are close and BLAMMO. Dead Druid. Okay, maybe that's just me. Again, moving on...

I am pretty good at not getting in anyone's way, especially in a crowd. I think Simon was annoyed with me a few times because in a long queue I would move out and around a corner (opening up a place for someone to cut in front of us) just so that no one would accidentally back into me, thus drawing agro. I can also weave through a crowd when on the move, avoiding the very social (meaning one mob/bad guy will see you and will bring several friends to eat you) survey takers and beggars in London and Paris and managing to not knock anyone out with my backpack as I run past.

The third one (hey! Math (1) for me!) is auto-follow. In Everquest and other games, there is a command that you type that lets your toon follow along where someone else's toon goes. That can be dangerous, in game, when that other toon runs into a forest or around a path through a mountainous area. In real life, if you don't pay attention when you're following or watch out for the person on /af with you, one or both of you will get lost. Occasionally in Paris I almost got knocked out cold by Simon's backpack because I was following too closely and he decided to look around to see if I was still there. Bless him, he doesn't game.

Anyway, those are ways that gaming has positively affected my real life. Don't try to comment on the negs, okay? I know all of them...and to quote Stan from South Park, " I am socializing *****! I'm logged on to an MMORPG, with people from all over the world and getting XP with my party using teamspeak."

And yes, I realize how sad that was, quoting a cartoon character to rationalize online gaming fandom. So? /rude

My friend Storm wrote a lovely intro for her anthology "What a Long, Strange Trip it's been", an anthology of "Wilderness Tips for World of Warcraft". It really addresses the whole What Isn't wrong with gaming thing in a comprehensive and intelligent way. (and I also got my first fiction story published ).

I don't spend hour upon hour any more,honestly because I get to stiff, but it is real socializing with the real people behind the avatars .. and it's a Lot more fun staying in touch with mates in San Diego, the UK, Denmark, Israel, Norway, Sweden, Holland and a few places I've forgotten, than it would be hanging about on the phone. And yes, we have people from all those countries in our guild.... :)

Just came back to read this comment from Sage...I miss you, my friend. To absolute bits.

Music Monday: And now for something wildly different...